The Opposite of Amber: Gillian Philip interviewed 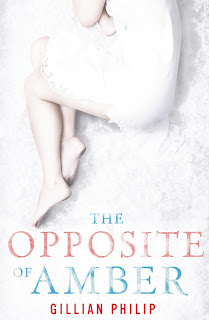 One of my absolute favourite writers for teens is the Scottish writer Gillian Philip, whose books are thrilling, terrfiying  -  she doesn't shy away from 'difficult' content -  and beautifully well written Gillian's latest book is The Opposite of Amber, the story of two sisters in a small Scottish town who fall into trouble and tragedy. I couldn't resist the chance to ask Gillian some questions about The Opposite of Amber, starting with the narrator, taciturn hairdresser, Ruby. -  Keren David
One of the things I loved about this book was the narrator, Ruby, who seemed to be full of contradictions. She says very little, she's left school young and she's working as a hairdresser. She jumps to conclusions and she makes tough decisions. But her inner voice is so intelligent and poetic, so deep and thoughtful. How did you create Ruby's voice?
I think like all ‘book voices’, Ruby just grew on me. I knew from the start that she was a very monosyllabic, reserved person who was gauche in company and shy about expressing herself – indeed almost mute – but obviously that’s not ideal for the narrator of a whole book! Once I began to write from inside her head, I realised there was nothing reserved about her thoughts – that she was almost bound to be far more articulate in her own head, because she was repressing so much. She could be very grumpy and self-pitying at times, and she had to be able to express her anger somehow, and I found her (sometimes objectionable) thoughts more forgiveable when she could explain herself eloquently, but internally.

I was very impressed - and a little annoyed - that you managed to trick me right to the end - great sleight of hand. Is the plotting of a crime book something you enjoy? How much do you plan out beforehand?

Oh good! I hope you weren’t TOO annoyed... and I’m quite relieved that almost no-one has guessed, because I spent a lot of time worrying it was too obvious. That must be writers’ paranoia! I do enjoy plotting crimes (fictional ones), but it’s quite a haphazard process for me. I do plan it a little beforehand, but quite often things change unexpectedly, when characters don’t behave the way I thought they would, or unforeseen complications arise. This time, for once, I knew who the killer was from the start.

My absolute favourite character was Foley's vile little sister Mallory, who added comic relief. I was dying to know more about the Foley family, and indeed all the characters. Do you have to rein yourself in when it comes to developing minor characters? I get the impression that everyone has a long detailed backstory which is only given to the reader on a need-to-know basis.
Ah, I’m glad you liked Mallory. I have a soft spot for her, though she is diabolically awful. I have to rein in secondary characters in my head, because I do get interested in them, but I’m quite restrained when it comes to putting it on the page (that’s only now that I’ve learned the error of my ways – I used to overdo it enormously). I do know their backstories pretty thoroughly, though. I do remember that the appalling Ma and Pa Foley came about after I watched a dog training programme one night, where the parents actually did make daily roast dinners for their dogs, and stuck frozen pizzas in the microwave for their son.

How much research did you do for this book? I'm thinking about subjects like prostitution, drugs and serial killers.
More than usual. Normally I like to wing it to a certain degree, but for this book I had to find out details like what crack cocaine smells like, or how police forces share information. At one point I overcomplicated the prostitution subplot, which I blame on an overuse of Google. I had Jinn plying her trade via the web – I found a lot of sex workers promoting their business with websites – before I realised that she simply wouldn’t be that sophisticated, and she would be ‘winging it’ as much as I was. At that point I turned to a friend who had been a local policeman and picked his brains instead – I threatened to thank him in the acknowledgements for ‘help with prostitutes’, but he called my bluff, and I chickened out at the last minute!

And, leading on from that, these are strong subjects for teenage readers. Are there any taboos left, do you think? Personal and general. And has your appetite for challenging subject matter caused you problems getting published or with readers, librarians and booksllers?
It’s hard to think of a subject that would be completely taboo, even in the Young Adult market – there certainly seem to be no taboos left in adult fiction. If there’s a subject I personally wouldn’t like to touch, it’s probably the murder of a young child – but that’s a very personal thing.
I haven’t had problems with publishers – they’ll occasionally ask me to take out an f-word or two, but I’m usually happy to do that, and it usually makes the text stronger (an occasional obscenity always works far better than peppering the manuscript with them). Oh, and I’ve actually been ticked off by teen readers for swearing!
I have been told on the quiet, though, of an occasional school that won’t stock my books, or a shortlist that won’t have me – usually that’s down to fear of parents. The only time I’ve really been offended was when a school accused CROSSING THE LINE of ‘glamourising’ knife crime. Obviously they hadn’t read it.

I read this book a few weeks ago, and it's haunted me -  especially the character of Nathan. Was it hard to move on as a writer?
Thank you – that is a really good thing to hear. I never intended to get so attached to Nathan myself, but his contradictions got to me after a while, and I became very fond of him (which of course doesn’t mean I cut him any slack). Funnily enough, though, it wasn’t so hard to move on from this one. AMBER was hard to write, and I spent a lot of time with the characters, and I was ready to say goodbye.
Posted by Keren David at 06:00