This is a fast-moving and exciting novel which introduces us to twins, Paisley and Beau. Lots of it takes place in Las Vegas and I was half way through the book before I googled the writer and discovered that far from being American, she was a young British writer whose first novel this is.
Full marks to her, then, for the authenticity of that sassy, clever, pacy US teenage voice that just sings off the page.

Paisley and Beau are  looking for their father who's been in gaol but is now out. Their mother is dead and they've been living with the Grandmother from Hell. Paisley gets herself deliberately expelled from school and she and Beau set off on a quest to find their father.
Crimes, both petty and not so petty, are committed along the way. Be warned: the language is very blue indeed at times and disappointingly, the end  leads straight to the sequel, so to speak which means: you're not actually at the end of the story. But all the way through, terrible things and  funny things and even a few really touching things keep you turning the pages.
Opinion will be divided about the cover. All you can say with certainty is: it's eyecatching! The shout line, Get over it. Nobody dies is a bit enigmatic, but hey, maybe it's also intriguing enough to make you want to pick the book up. Give it a whirl. 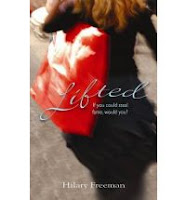 If you or anyone you know has ever stolen anything from a shop; if you've ever thought of doing so, if you've even been tempted and even if you'd never dream of doing such a thing, this is a book you'll find fascinating.

Robyn shoplifts for the kick of it and not because she wants what she's stolen. She gives her loot at once to a charity shop and this makes her feel less guilty. She starts a blog to write a kind of diary of her experiences, under the pseudonym Ruby. Noah, the computer-geek neighbour who's in love with her, gives her all kinds of techie help. Things go from bad to terrible in no time flat and the unintended consequences of Robyn's shoplifting habit on her, her friends at school, her family and the media are brilliantly explored.
Ruby the blogger becomes a sensation all over the internet and you'll find it hard to put the book down before you've seen how everything works out. Freeman is a journalist and knows exactly how to structure the book for maximum effect. Good stuff.

Alix, who lives on Hayling Island, and her classmate, an Iraqi boy called Samir, find an illegal immigrant on the beach one day and decide to hide him from the authorities. This sets in motion a complicated and nail-biting sequence of events. Samir has his own problems at school. Alix likes Samir but is a little wary about his brother. Everyone is concerned about terrorism and no one really knows anything about the man who's been washed ashore.
People grow and learn throughout this book. They learn about the terrible things that are happening in other parts of the world.
They learn about their own parents. They are surprised by the way perceived enemies can turn out to be friends. This novel raises all kinds of interesting questions but never loses sight of the fact that what we want to read first and foremost is an interesting story about people we can get to like. Do try it for yourselves. You'll like it and it'll give you much to discuss once you've finished. Point this one out to your teachers...they'll thank you for it.

Adèle Geras has written novels for children of all ages and for adults. Her website iswww.adelegeras.com Her latest book for teenagers is DIDO (Corgi pbks)
Posted by Linda Strachan at 07:00