Making CRIME out of a RIOT Anne Cassidy

The recent riots were grim. It’s awful watching young people (mostly) smash up the place in which they live. Then there are the headlines about feral youth and conscription and long jail sentences. I was a teacher for twenty years and experienced young people pushing the boundaries to see how far they could go. Mostly the adults who were in charge were able to hold and shape those boundaries so that most of the students found a face saving way to comply and get on with life just like the rest of us.

As a writer of crime fiction though the riots interest me in a different way. They concern the teenagers who I write for and about. They are a collective act of crime. Put the two together and I might have a book.

Every crime situation reported in the newspapers is a potential plot. The question is how to actually use the material. Here is the problem. A story about disenchanted youth going out and rioting isn’t enough to make a book work – at least as the story stands.

So the first thing a writer needs is a main character. There’s the boy who was doubly robbed and beaten on Barking station; there’s any one of the photographic images of looters, caught in a moment of self satisfaction; there’s the girl who jumped from the burning building.

Or, as a writer, maybe I’m more interested in the girlfriend of a boy who is involved. Or possibly the boy who is pulled along by the crowd as a laugh and ends up throwing a torch into a building. Or the girl who goes out in Croydon along with her mates to loot and is never seen again.

Then there is the shape of the book. It can’t run chronologically because there would be no suspense. A riot starts; it finishes; end of story. Maybe the book starts the morning after. Waking up with a sore head and not quite remembering what happened the night before. Maybe there’s a bloodied knife in among the main character’s possessions. Or possibly the best friend of the missing girl is phoning round to see where she is. Or the story starts as one young man is led down to the cells to start a long prison sentence and the book goes back and forth between his prison days and the night of the riot. Is he guilty? We won’t know until the end of the book.

I seem like a vulture tearing away at the entrails of this appalling episode. Or maybe I’m just a writer trying to go inside the events and find some individual stories. 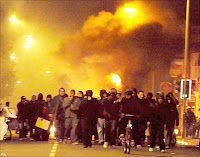