Researching crime might be a dangerous business - Linda Strachan

Writing about crime can be fascinating especially when you start looking in depth into exactly to how the crime might be committed and you discover there are lots of things you really do need to know.
Such as -

'Honestly Officer, I was just doing a bit of research for a book.....!'

When I was writing Spider I did quite a bit of research .  I went to meet a boy who had a history of stealing cars and 'joyriding'.  He was nervous at first but once he started speaking he seemed quite happy to answer anything I asked. I got the 'voice' of Spider from him.


I interviewed a youth liaison officer to find out what he could tell me about youth car crime.

I went out as an observer with paramedic crew from the Scottish Ambulance Service and also found out how calls were taken in their control room. 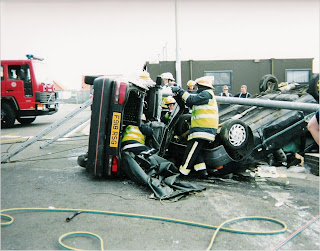 I also went to watch the Fire Service training school as they set up a practice scenario for extracting people from crashed cars. 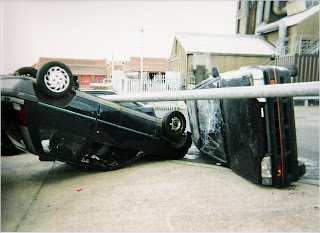 This was really useful to get the sound of crunching metal, and other noises, and I got a sense of what it must be like for those trapped inside a car after a crash.


Then there is the victim -

For Dead boy Talking I needed to find out what the physical signs were when someone is bleeding heavily from a stab wound,  how quickly do they start to lose consciousness, and what other symptoms appear as time goes on.

How long would they have to live?

I had heard (and the main character Josh tells us this, too) that it takes about 25 minutes to bleed to death.  But in reality it would depend on where you have been stabbed and how much you are bleeding.  It can all happen much more quickly  and take a lot less time than that, but Josh doesn't know this.  As happens to many of us at times, we hear a snippet of information and assume that we know the whole story.

Research can be not only interesting but also quite a lot of fun.

The Society of Authors in Scotland have organised several tours of police stations for authors with the Lothian and Borders Police.

I went on a couple of these and had a chance to get on a police motor bike - okay - so they were wise enough not to let me drive it anywhere!! 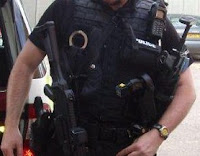 We spoke to the armed police who demonstrated all the gear they have to carry around with them. 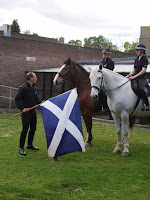 But we also got to see the police dogs and horses in training, probably my favourite part of the day.

Research into crime is fascinating and can be fun,  but just watch out how you ask those potentially incriminating questions.

Someone might get the wrong idea.
Posted by Linda Strachan at 00:53