Writing detective stories set in the Victorian period is a bit like being handed an enormous, elaborately wrapped, chock-full-to-the-brim Christmas present.

Every day. There’s just so much stuff to work with. It was a time of such wild enthusiasm and energy and invention and discovery AND horror, appallingness and bizarre evil-doing. And all of it – the good and the bad – writ extra large. They never did anything small, those 19th century types.
With The Slightly Jones Mysteries, I’ve got to play with both sides of the great Victorian divide. Each book is being built around both an audacious theft from one of the age’s wonderful new museums and the seedy underbelly of one of the age’s burgeoning cities.  (Can you have an underbelly that’s seedy?  If you can, then Victorian cities certainly did.)

In The Case of the London Dragonfish, my heroine moves from the grandeur of the newly-built Natural History Museum to the horrors of Newgate Prison, church crypts, and the cellar laboratory of a mad scientist in the mysterious Spirit Building, just in time to solve the case before (scariest of all) meeting Queen Victoria. 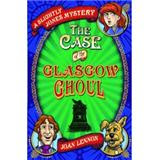 In The Case of the Ghoul, she’ll be travelling north to unravel a mystery involving the and the Glasgow Necropolis.  Are the thieves really a peg-legged man and a trained chimpanzee, or is the truth stranger still?

And then, it’s on to for The Case of the Cambridge Mummy – I haven’t finished writing that one yet, but it already has bloomers and bicycles and mummies and a crazed professor who thinks she’s the reincarnation of an Egyptian queen …
I have an indecent amount of fun at my job, I really do.
Cheers, Joan.
P.S.  If you want to find out more about the series, visit Slightly’s Notebook at www.slightlyjones.co.uk
P.P.S.  Wouldn’t it be amazing to have an age named after you?  Go on, admit it ( and tell us) – you know you’ve thought about it!  I just wish Joan Age didn’t sound so much like Stone Age …
Posted by Keren David at 07:00