Have you ever done it? by Hilary Freeman 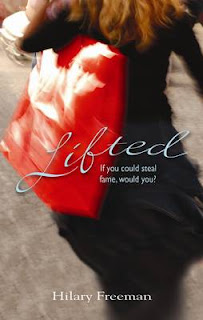 When people find out that I’ve written Lifted, a novel about a girl who achieves celebrity through

shoplifting, the first thing they invariably ask me is (you’ve guessed it): ‘Have you ever shoplifted

It’s an interesting reaction. If I’d written a book about murder or armed robbery I’m sure nobody would dream of asking me if I’d killed anyone, or raided the local post office with a sawn-off shotgun and a pair of 15 deniers over my face. But shoplifting? It’s not like other crimes. It’s something we assume most people have done at least once in their lives - more a rite of passage than a sign of being bad or mad or dangerous. And that’s what makes it so fascinating.
While some people shoplift because they need to, the majority do it for the thrill, the buzz, the delicious risk of getting caught. Sometimes it’s a cry for help. Sometimes it’s just an expression of futility. The stats show that the more materialistic society becomes, and the more ‘things’ we all possess, the more young people seem to shoplift. Why is this? Why do people like Hollywood actress Winona Ryder, who appears to have it all, need to shoplift? How do we view them when they get caught? What does it say about the world we live in? These are all questions that I hoped to explore while writing Lifted.
So, back to that initial question: have I ever shoplifted myself? Now, that would be telling.
Lifted is shortlisted for the Lancashire Book of the Year Award
Posted by Keren David at 00:25