The reason I started writing the Saxby Smart detective stories for 8-12 year-olds was that I'd always enjoyed reading crime fiction, and one day it suddenly occurred to me that I'd never actually tried writing any. Or, at least, nothing you'd specifically label as crime fiction. Since then, I've often been asked what my own favourites are, so here they are:

Firstly, there's The Moonstone by Wilkie Collins, widely credited as the first detective novel ever written, and still a thumping good read. I have to admit, I love Wilkie Collins's work. I'm always surprised he's not more widely read these days, since personally I think he's a more accessible Victorian author than even Dickens. His later novel The Law And The Lady is another great detective yarn, although for some reason it's never presented as such. (It also contains an unintentionally comic female protagonist, all fluttering eighteenth century virtue and pre-feminism ideals!) 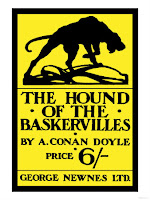 Secondly, another Victorian masterpiece: Conan Doyle's The Hound Of The Baskervilles. Few novels of any kind are as thoroughly atmospheric, and this one positively reeks of lonely, windswept moorland. It's odd that this is still perhaps the most famous of the Sherlock Holmes stories, because it's so untypical of them. For a start, Holmes is, of course, absent for most of it.

Thirdly, The Maltese Falcon. Well, you just can't go wrong with Dashiell Hammett, can you? It's one of those books, like the novels of Edgar Wallace, that you feel you've got to read in a yellowed, dog-eared old paperback edition to get the full effect. American noire of the '30s is so powerfully evocative of its period, I always think it ought to be given to history students.
Now, where did I put my trenchcoat...?
Simon Cheshire is one of the UK's leading children's writers, and his Saxby Smart detective stories for 8-12 year-olds are among his most popular titles. You'll find more information at Simon's website www.simoncheshire.co.uk