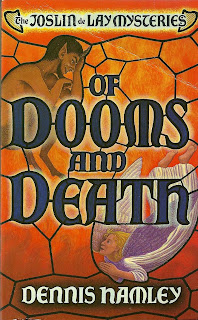 But if you want to write a murder mystery of the old sort, one which is solved with just your eyes, your ears and your commonsense, you’ve got to think differently. And that’s where setting crime stories in the past comes in. You’ve got to work out the solution to the mystery for yourself because there’s nothing to help you. You don’t know where people are because there are no phones, not even landlines, you can’t move faster than walking pace unless you’ve got a horse, a letter will take months, nobody has thought about fingerprints and DNA wasn’t even heard of. That’s why I turned to writing crime stories set way back in the past – and decided to set them in the Middle Ages.

The figure of a seventeen year-old French minstrel lost in England stole into my mind and the Joslin de Lay Mysteries were the result.
They were published by Scholastic and came out between 1998 and 2001 – six novels set over six hundred years ago in about 1370, telling the story of Joslin’s quest from France to Wales to find his mother after his father was murdered. Being a minstrel, Joslin sings his way through the land because he’s welcome everywhere. He can sing in inns and taverns to ordinary people, he can sing in Oxford colleges, he can sing in castles to Earls. All of society is open to him.
He has his own big mystery to solve, which finally comes clear in the last book. But on the way, in every town he comes to – London, Oxford, Coventry, Hereford -murder stalks him.

Of Dooms and Death,
A Pact with Death,
Hell’s Kitchen,
A Devil’s Judgement,
Angel’s Snare,
The False Father.

Six separate mysteries, lots of dead bodies – and Joslin solves them all.

But it’s not just murder which follows him: a forbidding, threatening, evil character is hunting him across the land as well - and he possesses the key to the whole of Joslin’s story.

The Middle Ages really are another world. So much research to get everything right, all of it fascinating. Here are some ways in which I tried to make the facts come alive.
I loved writing these books. I said I’d do just six, separate novels but with a larger story overarching them.  My hero wouldn’t die but I’d make sure there couldn’t be any more books about him. 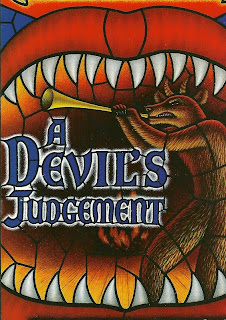 When they came to an end and I finally had to say goodbye to Joslin I felt really quite upset. We’d been through a lot together but I knew he would be happy and well-provided for and I often think of him still singing and living with his wife, the girl he met in the first book and who he finds again in the last..
Joslin de Lay books are out of print at the moment. I hope they’ll soon reappear as ebooks and later on be published again as paper books. Because I think he’s worth it.

And so is historical crime. I may write some more, But they may be about an older and wiser Joslin.
Posted by Linda Strachan at 08:00