THE STERKARMS: A LIFE OF CRIME by Susan Price 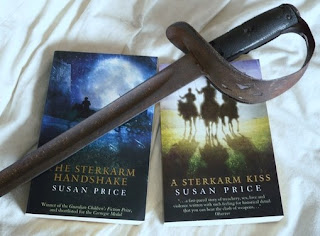 
If crime is your bag, then the Sterkarms supply it wholesale.

Their whole life is one of constant petty war-fare: they raid their neighbours and rob them, fight with them, kill them – and are raided and robbed in return.

They rob and murder for profit, for revenge, for honour.“Who dares meddle with me?” their anthem proclaims, and that is partly the point – to build so fearsome a reputation that no one will dare meddle with them.

One thing to be said for this way of life – it releases tension. At home the Sterkarms are affectionate, if a little boisterous and shouty. (Bottling things up and politely seething is not their style.)
As a visitor, if they have no quarrel with you, you will find them the most generous and attentive hosts possible, making every effort to ensure your comfort, and giving you the best of everything they have, even if the best, by way of food, is haggis and beer as thick as porridge.

Even if they do have a quarrel with you, you’ll be safe while within their walls. But once you leave… Then you’ll hear the hoof-beats coming up fast behind you.
Still, no matter how friendly you are with Sterkarms, don’t waste energy trying to make any kind of agreement with them. Since you’re a guest, they’ll smile, refill your cup with thick beer, pile your plate with haggis and say whatever they think you want to hear. It doesn’t mean a thing.

You’re not a Sterkarm, so you don’t count. No promise made to you has to be kept, no deal shook on has to be honoured.
Outsiders call them treacherous and untrustworthy liars. Since many of them are left-handed, it’s said that they shake with their right, and stab you with their left.(Their badge, a left hand holding a dagger, is known as ‘the Sterkarm handshake.) It’s said of them that, ‘..they rob and thieve and murder but have a hundred smiles and a thousand honeyed words to save their necks…’

Read an extract from the Sterkarm Handshake

Of course, you’ll hear a different tale from the Sterkarms. If they occasionally rob others, they say, it’s reparation for the many times they’ve been robbed. If, occasionally, they murder, it’s purely in self-defence, or honourable revenge. If they seem warlike and aggressive, then it’s only because it would be fatal to be thought weak - their neighbours would take their land, their cattle and everything they had. As for keeping promises: a promise is sacred to them – if made to another Sterkarm.

They have a point. Sterkarms – who you can meet in my books ‘The Sterkarm Handshake’ and ‘A Sterkarm Kiss’ – live in the first part of the 16th Century, in the ‘Debatable Land’ between Scotland and England.

It was a no-man’s land and a war-zone. Since both England and Scotland claimed it, and refused to come to terms, it was a high-road for armies, while neither country could – or had any real wish to – impose law there.

The Sterkarms livelihood was cattle-rearing, but the depredations of their neighbours and passing armies soon made that impossible without fortified towers and armed men ready to fight off raiders. And if the armed men are to hand, and you’re feeding them – well, why not lead them on a raid, and rob others, as you’ve been robbed? The change from cattle-rearing to cattle-rieving was inevitable.

It’s an age-old problem with crime: people are driven to it by necessity, but then it becomes an ingrained way of life, in which children are reared and trained.
I wouldn’t want the Sterkarms as neighbours, not at any price. But in their time and place they had the choice of riding, or being ridden down – and they chose to ride. With that, I can sympathise
For further information read this fascinating interview with Susan Price about the Sterkarms

And at: kindleauthorsuk.blogspot.com
Posted by Linda Strachan at 08:00