Meeting Murder on the Way 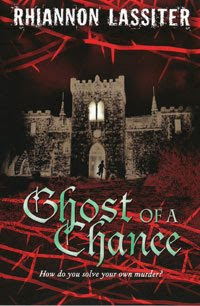 Rhiannon Lassiter writes about blending the crime novel and the ghost story in her latest book: 'Ghost of a Chance'.
2011-02-06

At the beginning of my novel, Ghost of a Chance, thirteen people are expected for dinner but Eva Chance, the unlucky thirteenth guest, has no place laid for her at the table.

The only people who seem to notice sixteen-year-old Eva are the ghosts of the stately home where she lives. Some are friendly, some frightening, and the most dangerous ghost is The Witch, a malign ghost haunting a medieval ducking stool in a cellar full of torturer's tools, who tells Eva something terrible.

With horror Eva realises that The Witch is right. No one can see her except for the ghosts. Eva is sure her death isn't an accident, she knows she wouldn’t have committed suicide and she suspects foul play. Eva decides her mission must be to solve her own murder.

Being a ghost detective presents special challenges and has some particular advantages. No need to listen at doors or hide behind curtains: Eva can listen to what the suspects say and do when they think themselves in private. But conversely: no opportunity to question the living where they were at particular times: Eva can only be reliably seen by the dead.

My book follows the rules and patterns of ghost stories and of crime fiction. For example, one rule of the classic crime novel is that the murderer must always be introduced in the opening chapters. As thirteen people arrive for dinner at Chance House my murder is there in those early pages. I won't spoil the story by telling you whether they're an invited guest or not!

The stately home is an ideal setting for a ghost story because of the centuries of people who have died under its roof. From family ghosts to the invisible servants still more invisible after their death, it's not hard to imagine that the grand country houses as teeming with ghosts. My house itself is a sort of ghost, a reminder of a vanished splendid past.

In both kinds of mystery fiction there should be clues and seeding these was at times a delight and at others an agony: trying to reveal just enough to challenge and intrigue, to hide enough that the evolving plot would startle and shock the reader. Readers who pay close attention to the text will find their efforts rewarded. The murderer is guessable if you work at it but there are other secrets too. Where is the missing body? What is the motivation for the murderer? Why does Eva have the powers she does?

There's more than one type of crime in progress, more than one family secret hidden in Chance House. There's a will with unusual terms, a maze within a maze, a sinister history, unexpected relationships and twists and turns as planned and confusing as the formal gardens: now overgrown with a tangle of greenery.

Between the murderer and the curse of the ghost witch there are all sorts of 'accidents' and injuries and by the time the House actually opens to the public the body count is climbing high. As the tension mounts, the two plots become even more closely twined together. The unmasking of the murderer happens just as the characters are challenging The Witch.

Ultimately Ghost of a Chance is a novel of life and death. What I like about Eva as a heroine is that in sixteen years of life she's been passive, allowing others to make decision for her, drifting aimlessly through her own life. But after hearing that she's dead, she suddenly becomes much more active, wanting to make changes and affect the world.

The cardinal sin of writing about crime fiction is to give away the ending. So I won't tell you how all those plots work out and whether or not the murderer is caught and punished. But I was pleased with the eventual solution of the mystery and I hope you will be too.

For me it's been a challenge, a real learning experience and ultimately a huge relief to finally see it published after three years work. I don't know where my writing will take me next but I learned a lot in writing this book and becoming immersed in two genres I love to read.


You can write to Rhiannon Lassiter using the form on her website. Did you guess the murderer? Does Ghost of a Chance succeed in blending ghost stories and crime fiction? Was the ending elegant, terrifying, or a big surprise?
Posted by Anne Cassidy at 18:42

Email ThisBlogThis!Share to TwitterShare to FacebookShare to Pinterest
Labels: Rhiannon Lassiter Ghost of a Chance