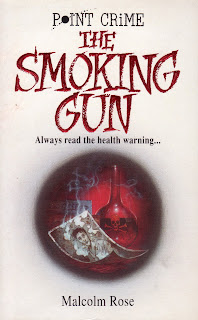 I admire the way that nature develops chemical weapons. It comes up with some (literally) stunning designs for either defence or attack. Some of nature’s toxins will harm or kill a human being and I enjoy dropping them into crime novels. Here are some of my favourites, but please don’t try any of them at home, even though you may have some of the ingredients.

I don’t want anyone to bite off more poison than they can chew, so I’m releasing my top ten two at a time. And I’m doing it in reverse order to inject some stomach-churning tension.

10. Nicotine. Extract the nicotine from tobacco and you’ve got yourself a viable human poison. It causes sweating, dizziness, vomiting, diarrhoea, convulsions, paralysis and respiratory failure. In 1940, a woman got rid of her husband by taking the nicotine from cigarettes and mixing it with his aftershave. (Nicotine can be found in The Smoking Gun.)

9. Arrow-poison frogs. Made famous by South American tribes who scrape their darts over the backs of these frogs. Anyone shot by the arrow will feel the effects of the toxin within minutes: nausea, hallucinations and heart attack.
Posted by Anne Cassidy at 17:40